“What do you want for your birthday, Daddy?”

“I want you to get well and come home from the hospital with me, Mom and Timothy.”

“I know! I know! But, what do you really want as a present?”

“Well, you know, Em, I want to get into the Hawaii Ironman.”

In the spring of 1997, our family moved from San Diego to Los Angeles. We moved to a little apartment in Westwood where we could walk to Emily’s bone marrow transplant room at UCLA Medical. Bob spent the nights with Emily on a hospital bed as her roommate. Each morning was the changing of the guards, where Timothy and I would come in for the day while Bob went off to work.

When we started this new way of life as a family, Emily was five years old and Timothy was an infant, just six weeks old. Our prayers and focus was entirely wrapped around the fact that Emily’s leukemia had returned and she was about to receive an experimental stem cell transplant. She was the fifth patient at UCLA to have this opportunity.

Emily’s transplant room was filled with toys, dolls, decorations, art projects and a huge Wishbone calendar on the wall. You might remember Wishbone, known as “the little dog with a big imagination.” Emily loved this TV show where a real dog went on all sorts of adventures with children. Each page of the calendar showed a new picture of Wishbone on another escapade.

We arrived in our new home at end of January and three Wishbone pictures later, Bob had circled his April birthday on the calendar making big arrows aimed at his special day. It transformed the attention and lightened the atmosphere like a big teasy thing.

Emily and I were thinking of Daddy’s birthday instead of being stuck inside all day, every day, month after month.

Once Emily knew what he wanted, a plan began to unfold. The idea was just ask the “Lottery People” to pick her dad.

The Hawaii Ironman is the Holy Grail of the sport. It’s the World Championship, held in the town of Kona on the Big Island. It’s the site where the best athletes of the world flock to this tiny town every October to swim 2.4 miles in K, bike on the hot, windy Queen Kamehameha Highway, past the sweltering lava fields for 112 miles and then run 26.2 miles, yes a full marathon! In April of 1997, there were only two ways to compete in the Hawaii Ironman: you could win your age group at another Ironman race or be randomly picked in the lottery. 150 slots are held for “ordinary people” like Bob. Bob had applied to the lottery every year since before Emily was born. This year was his tenth time trying and Emily knew the drill.

My name is Emily. I am five years old. My dad’s name is Bob. He is a triathlete. Please pick him for the Ironman.

I am having a transplant to get rid of my leukemia. My dad’s birthday is in two weeks and I can’t leave my isolation room to get him a present. Maybe if I write you a letter you will pick him?

If you pick my dad, you will make a great choice because it will be his big dream come true. He will be smiling the whole day.

He has finished two Ironman races and I helped him with hugs, water and a little massage. Please pick my dad, but if you don’t he’s still an Ironman to me. Thank you!

They picked him!!!! They called Emily’s room to let her know! Right into the UCLA Medical Center!

Emily was so excited, yet so very sick. We swore one another to secrecy and promised to make it a surprise. She was on board and promised to not even give him a clue. When he came to her hospital room that night, I said, “Oh, by the way, we figured what to get you for your birthday.”

Bob asked, “Is it furry with a tail that wags?”

“No, it’s not a Bassett Hound!” Emily knew how much Bob loves Bassett Hounds and our Bassett, Betty, had passed away from lymphoma just before Emily was diagnosed.

And, she never told her dad. Five years old and she kept the secret.

By the time Bob’s birthday arrived, just two weeks after the call came in, Emily’s health had deteriorated so badly that she was in the ICU in what they called a “drug-induced paralysis.” If you saw her, you would say she was in a coma. On the morning of Bob’s birthday, the “lottery people” were all set to arrive at UCLA Medical Center to make the presentation in Emily’s hospital room and the big surprise was about to be unveiled.

Bob worked for the FBI and was fortunate enough to get a temporary transfer from San Diego to Los Angeles when we moved. His peers and colleagues at both FBI locations were in on the surprise. Our neighbors and friends from San Diego knew about it and all the other patient families and folks who worked with Emily at UCLA knew that the lottery people were coming. Bob had not heard a word!

The plan was to hold a big “surprise party” in Emily’s transplant room.

It’s the morning of Bob’s 46th birthday. He’s sitting watch by his daughter’s bedside when I enter the tight little isolation room, tucked way in the back of the ICU. The tiny, sterile space is a stark contrast to her bright, toy-filled transplant room. There are two full-time nurses to handle all the machines, respirator, dialysis, and numerous lines into her heart.

“Hey, Em?” talking to her as though her eyes are open and she’s wide-awake. “That surprise we got for Daddy is here… in your old transplant room. I’m gonna take Daddy there, now. We’ll be right back!”

Bob and I each give her a kiss and head out of that cramped isolation cubicle, past all ICU patients, down the long hospital corridor, through many double doors until we find our way back to the transplant unit.

During the walk, Bob knows something is up, but really has no idea. He gets to room, skips past washing his hands at the big sink and opens the door.

Ten minutes go by and there’s a knock on the door. It opens slightly and a perfectly coifed head appears, “Is Bob Jordan here?”

Bob looks toward the door, “Yes!” with a confused expression.

Man with perfect hair steps in, a cameraman on his heels. “Did you apply to get into the Hawaii Ironman by lottery?”

“Are you aware of a letter that your daughter, Emily, wrote to the “Lottery People” on your behalf?”

Bob just shakes his head to indicate, no idea what this dude is talking about.

My name is Emily. My dad’s name is Bob. He is a triathlete…..

He read every word while the tears came down. To look around the room at some of the most fearless folks I know, all carrying concealed weapons and letting their tears stream as Bob read that letter will be forever etched in my heart.

Emily was thinking of her dad while undergoing a stem cell transplant and did something for Bob that he wasn’t yet able to do for himself, get him a slot into the coveted competition: Ironman Hawaii.

After the party, we went back to Emily’s isolation room in the ICU and told her the whole story. I swear that I noticed a little smile.

This is a picture of the original letter that Emily wrote (well, dictated) from her hospital room. 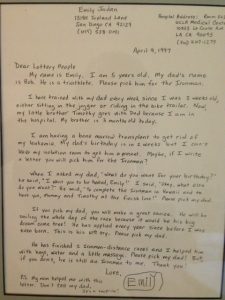