Passing the Baton by Bob Jordan

Something happened at a race this past weekend. Something that’s not often mentioned in training articles, mostly glossed over by coaches and ignored by athletes themselves. Yet that something is inevitable and, largely, painful. It’s the passing of the baton.

In my family, I am the resident uber-athlete, the big dog on the porch when it comes to working out. Although my wife Terry is a 3rd Degree Black Belt and martial arts instructor and multiple Ironman finisher, she is more a fellow traveler than an actual contender for my throne. My workout laundry heap is bigger than hers and probably yours, as well. In fact, on the subject of working out, I have been teetering on the lunatic fringe of endorphinia for years. I have done some 40 marathons, have 17 Ironman finishes under my belt (wanna see my logbook?) and a slew of other sweat related stuff that’s just been fun and a major part of my adult life. In fact, at age 61, I seem to be getting worse.

When Terry stops strangers on the street to say we have never been on a vacation that doesn’t involve a race, or tells people I did an Ironman on our honeymoon, I’m smiling, I’m proud: what could be cooler? Right? …….Our son Timothy has grown up around this scene, having come across the finish lines of marathons and Ironmans with me, all around the United States, congratulating me, carrying the gear, cheering dutifully.

Did I mention him growing up?

Therein lies the rub. Terry and I were signed up for the San Diego Rock and Roll Marathon this past weekend as “just” a destination race, when Timothy announced he was interested in doing the 1⁄2 marathon. At 15, he was running track and cross-country, but had never directly wandered on to my porch, so to speak. He was fast but these were shorter, much shorter events; and as a non-student, I was not eligible to toe the starting line with him.

But his interest in running San Diego was exhilarating to me. I dropped to the half marathon so he and I could run together. I had this fantasy, call it Fantasy # 1, of he and I running together, side by side, for 13 miles, father and son, while I pontificated on the nuances of endurance racing. He would be attentive. I would be Ward Cleaver in running shorts and Oakleys. He would be The Beaver. (Can I say that?)

The fantasy continued that I would slow down to a pace he could stay with, so his breathing hard would not compete with my pontification. Timothy was not consulted on the details of the fantasy, as that would be unnecessary, right? I worked out a training plan for him for 6 weeks before the race, which he ignored. He politely declined multiple opportunities to run together as race day approached. Now I am aware that parents of teenagers will eventually get kicked to the curb as they become less and less cool to be seen in public with. I get that. But not Ward Cleaver, right?

Fantasy # 2 was that in the anxiety of the race start, he would relent and we would run together. However, on race morning, with 30,000 other runners present, Timothy disappeared in the crowd after making it clear he didn’t want us to run together. My Fantasy # 3 jumped in to the void, reassuring me that he would fade after 3 or 4 miles and I would rescue him with a slower pace, nutrition advice and sympathy. Fantasy # 3 continued that Timothy and I would celebrate a simultaneous finish with matching finisher medals and manly fist bumps and then go look for June Cleaver out on the course.

But when the gun went off, so did he. I looked for him as I ran, confident that I would catch up to him mid-race (see Fantasy # 3 above). I set my GPS Virtual Partner for an 8:30 pace, figuring that would deliver the ungrateful little, er, uh, my son into my grasp at the midpoint of the run. A mile in I was doing an 8:15 pace and going faster, looking for my “lost” son, until a friend spotted me at mile 7, saying that Timothy was 3 minutes ahead and had announced he would “crush” me. “Wait a minute,” I thought, “this was no race, I was supposed to rescue him.” I turned up the pace. Maybe he was delusional with hyponatremia, or heat stroke, you don’t know you weren’t there. He might need me. I ran faster, then way faster.

A hairpin turn in the course at mile 11 was my opportunity to spot him and I did. He was about 1⁄2 a mile ahead, oblivious to the drama playing out in his wake, looking totally mellow. Although the “Eddie Haskell” in me wanted to try and sneak up on him and blast past him, I decided to do the right thing and call out to him during the hairpin. “Hey, Buddy, you’re looking good”. He waved, hesitated, and took off. I did not hesitate but apologized to my Virtual Partner and bolted, or at least bolted like a 61 year old uber something. My calculations told me that I would have to run sub 7’s to catch him over the next two miles, if he didn’t speed up. No way. I dug deeper, maybe deeper than ever.

A few minutes later, I crossed over, the finish line that is, and found him. He was beaming, he looked like a million bucks, having done his first 1⁄2 marathon. I was 130 seconds and a sea change behind him. He was gracious, he was smiling, he’s my son.

There’s a ceremony when you graduate from high school or get married; but not all of life’s rites of passage get talked about. Timothy is our family uber-athlete. He’s the Man.

Did I mention I came in before June? 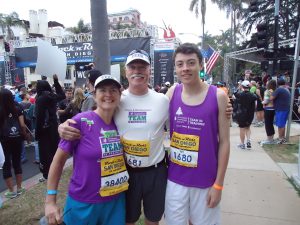