On April 18, 1997, our daughter Emily’s stem cell transplant was not going as expected. It was her last chance “to get rid of leukemia,” (as Emily would tell you). Fluid seemed to be filling every part of her body, even all the spaces between her cells. Her belly was huge, looked as though she was pregnant. It was so big that she could barely breathe and all she wanted was for me to rub it. She had to be propped up in bed and even then, was so uncomfortable and in so much pain that she was giving herself morphine via her port.

There was a meeting, one of those serious types with Emily’s doctors, my husband, Bob and me, complete with papers to sign and a heaviness in the room. We were told that the next best step for Emily would be to do what they called, a “drug-induced paralysis.” This way she could be intubated and placed on a respirator. We were told that when children get to Emily’s condition, there is only a 25% chance that they will be able to come off the respirator. The doctor kindly spared us the unthinkable reason, but did say, “If there is anything you would like to say to her, now would be the time.”

Emily was only five and a half years old. What do we say? Bob looked at me and said, “I’ve been with her all day, why don’t you go in and spend this time with her.” I was so grateful for this moment and knowing Emily, I sensed she would not want to hear a bunch of medical talk.

I went into her room, “Hi Em! Do you want to hear a story?” She looked at me and nodded. I went over to her bedside and sat down next to her where I could reach her and made up a story right then and there.

Sally decided to wrap herself up in her favorite yellow blanket and she drifted off to sleep. Emily immediately reached for her yellow blanket and I continued… She slept and she slept and she slept until one day…….she noticed some light coming through. It was her eyes. She was waking up! Well, the first thing Sally did was look down at her belly. It was flat! Just like before she had started doing all that eating. The next thing she did was reach for her yellow blanket. It was gone! Sally had become a beautiful butterfly!

The moment the story ended, the door to her isolation room flew open and a team of doctors streamed into her room, the room where she had spent the past few months. I wasn’t ready. I only had two minutes with her. But, there they were, securing her IV bags and unplugging the bed from the wall. Off we went, down the long corridor, Bob had joined on the other side of her bed and several medical folks at the front and back.

“Mommy, can you tell me that story again?” Emily asked as we were making our way.

“Sure, Sweetie!” And I began again, “Once upon a time there was little caterpillar named Sally. Sally loved to eat and that is what she did…..a lot.”

On and on the story continued as we snaked our way down corridors, through big double doors and then into the ICU where the story ended. We rolled past several other patients and finally to the back of the unit and into a very tiny isolation room within the ICU. The main doctor looked at Bob and me, and said, “You may step out if you wish.” Bob nodded and left the room. I stayed right where I was holding Emily’s hand. The doctor spoke again, “It’s really time for you to step out now. Parents don’t stay for this procedure.” I stood still and told him, “I promised Emily that I would stay.” He shook his head, but did not make a scene. Just then Emily asked, “Mommy, can you tell me that story again?” I looked around her bed and counted nine people, all doctors and nurses. They were literally perched with all the equipment, ready to get the procedure underway, and I began a third time,

Once upon a time, there was a little caterpillar named Sally…..

I looked at Emily and she was totally into the story. You know how kids like to hear a story over and over? I looked from one medical professional to another and back to Emily and continued telling the whole thing, even rubbing Emily’s belly as I told it. They each watched me as though they had been transformed back into kindergarten. The moment was brief, yet oh so beautiful. There was no difference between adults or children, just a story. When I finished the third time, Emily asked, “Where is my yellow blanket?” I showed her. It was right there, still under her hand. She looked at me and nodded, her signal that told me she was ready for the procedure. I told the doctor, “She’s ready now.”

The intubation took place. The respirator began. Emily never regained consciousness. We had another one of those serious meetings on April 29. This meeting was to inform us that they felt it was time to remove the life support. The butterfly story was the last story Emily heard while conscious. 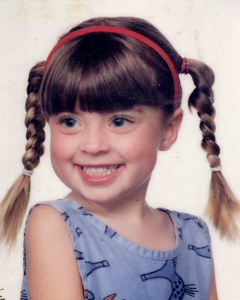